Welcome to our quiet little village Engelum, in de neighbourhood of Frisia's capital Leeuwarden (Holland). Engelum, with only 400 inhabitants, is situated in the middle of Frisia's green grass and waving cornfields. Our village offers you a rich amount of hikingtracks that will bring you to scenic views, old farms and modern windmills. Besides that our village has a very sparkling social life because of its extremely friendly population. 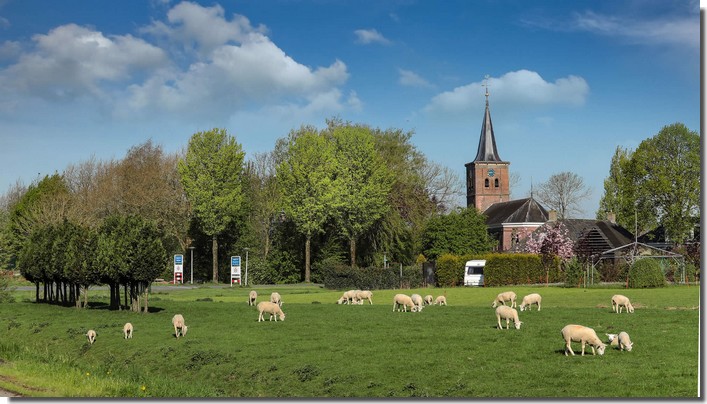 Shortly, we felt that it would be a good idea to put our village on the internet. That is why we are proud and happy to present to you the first internet site of Engelum. We already have a great number of hits!

What more has Engelum to offer?

- a real museum with old tractors and farm machinery
- a playing-garden for small children
- a playground (soccer, baseball) for the older kids
- a handball field (kaatsveld) for people of all ages
- a beautiful village hall for everyone!!

For all of you who have never heard of Engelum (which would be a miracle in itself ) we have added a little map to indicate where we live exactely.

The history of our village

During the fourth and fifth century barbarian peoples from Nothern Germany, called the Angels and Saxons, invaded Englands' coasts.

The story goes that on their way to England they came through Frisia and founded the village of 'Angelenheim' alias Engelum as a memory of their famous name.

Linguists have found another explanation of the name of our village: Engel is the name of a person followed by um, which means yard. When we solve the puzzle we'll find the following translation: Mr. Engeles' yard.

Sixty geometrically decorated potsherds from our local terp-excavation prove that there were already people living here before the birth of Christ.

We could tell you a lot more about the early history of our village but now we'll concentrate on two examples of the many colourful inhabitants our village has hosted during the centuries.

The most important example of local fame is Skerne Wibe, lord of Engelum, who's deeds were great. He shaved his chin and dressed as a monk in order to discover the secrets of his enemies. In the year 1482 he died during the siege of his castle by the inhabitants of Franeker and Leeuwarden. The castle of Skerne Wibe was devastated but the name of its lord stayed in the memory of the people: today our village hall is named Skerne Wibe

A second example of colourful person is the story of the female giant of Engelum. Many years ago one of the women of our village was famous for her size and weight. Her epitaph tells us that she was one of the biggest women on earth, huge of shape and mighty powerful. Her total weight was 345 pounds and the epitaph ends with 'although one is so big and heavy, blessed are they who praise the Lord eternally'.

For more pictures of our village click Engelum in beeld in the menu.

We would be happy if you would send us a reaction so we would know in which countries our page has been read.